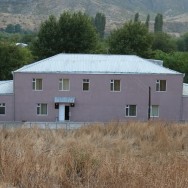 Today Our Town Has Faith

Five months has passed since the reconstruction of the community center/complex of Vurgavan Village in Qashatagh Region. The complex was built in the summer of 2015 by Hayrenaser Organization and consists of school with a gym, a health clinic, and a community administration center.
Vurgavan was liberated during the Artsakh war and named after the liberation-fighter Vurg Voskanyan. Although, the process of resettlement began back in 1994-1995, the school had remained in a desolate condition and a hazard to student health up until 2015. Moreover, the town also lacked a health clinic and an administration center.
The grand opening of the infrastructure complex took place on September 5, 2015. According to the town mayor, Gueorgui Khachatryan, these infrastructures gave new hope and faith to the villagers. “I am currently at the town center,” the mayor added during our interview. “More people attend our meetings to discuss issues concerning our village now,” emphasized the mayor. Before the construction of the administration center, town affairs were discussed in the streets or at the mayor’s house, depending on the weather conditions of the day.

END_OF_DOCUMENT_TOKEN_TO_BE_REPLACED 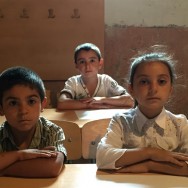 Here are the photos of Herik community school students. Just for them this year The Hayrenaser Organization will construct a new modern, clean and comfortable school.